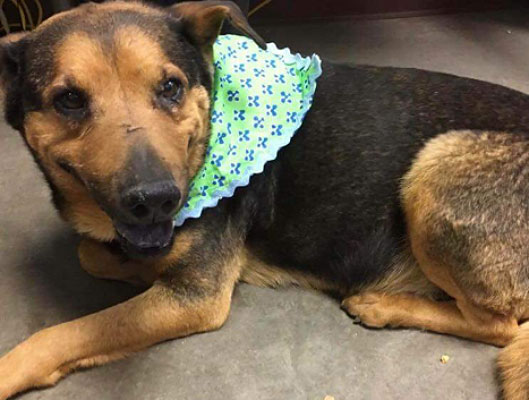 Jordan a volunteer who networks senior dogs and e-listed dogs from MCACC found this sweet guy. She was networking Rupert and a potential adopter saw that he was dribbling urine.  It was then discovered that he couldn’t actually urinate.  We then started the process of trying to get him help.  Mary asked us to call Two Pups. Our vets took an xray, but couldn’t determine what the problem was other than a large bladder.  Rupert was e-listed every night and we pulled him every night.

Once the xrays were sent to Doctor and reviewed, she was troubled.   She woke up that evening worrying about Rupert and his bladder.  The next morning Rupert arrived for treatment. It was discovered that he had a major blockage that was preventing him from urinating. After a two and a half hour successful surgery by Dr. Gilson at Pet Urgent Care, Rupert was on the road to recovery.

Dr. Buczek took him home so he is staying with her so she can monitor him.  She asked today if she could have a friend foster him.  The woman is 75 years old and just had to euthanize her Chow.  She says she is too old for a dog, but is having a difficult time coping.  Rupert may be exactly what she needs.  🙂